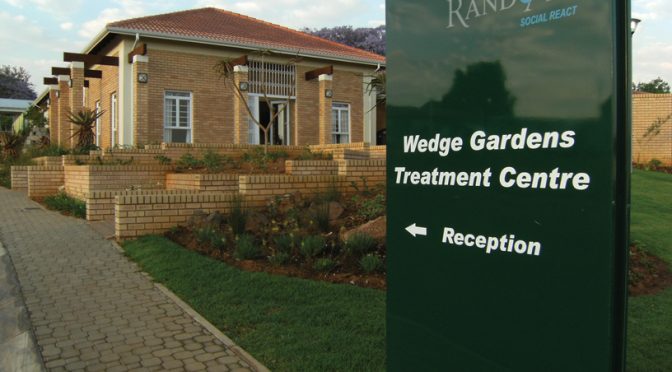 After relocating last year, the South African National Council on Alcoholism and Drug Dependence (Sanca) is settled in at Wedge Gardens treatment centre in Whitney Gardens, Lyndhurst, just outside of Johannesburg.

Wedge Gardens officially become a member of the Sanca family in 2016 after going through the approval process with Sanca’s National Management Board.

“With the Sanca head office on the premises of Wedge Gardens, a closer working relationship has been established. Numerous clients have been referred for treatment through the website and WhatsApp helpline. In addition, other stakeholders visiting the National Sanca Office get to know about Wedge Gardens,” says Sanca spokesperson Adrie Vermeulen.

“Wedge Gardens offers a safe, secure and welcoming environment. We feel at home and have received excellent support from the maintenance and gardening services,” she adds.

“The management of Wedge Gardens, Ayanda Matthews and Adel Grobbelaar, has been wonderful and helped us settle in. It is a mutually supportive and beneficial relationship.

“As one of the oldest rehabilitation centres in the country, Wedge Gardens is one of the flagships of the type of services which should ideally be provided to treat substance use disorders in South Africa,” says Adrie.

Established in 1956, Sanca has a proud history of contributing to the prevention and treatment of alcohol and drug dependence. It has evolved over the years to meet modern challenges and today boasts an Academy of Learning that offers Health and Welfare Sector Education and Training Authority-accredited courses for those who have a passion for working with people.

Sanca has a presence in eight of the country’s nine provinces. Wedge Gardens is one of 30 Sanca treatment centres.

“We are proud to be part of this hard-working and effective non-profit organisation,” says Ayanda.

* For further information on Sanca or to enrol for one of the courses offered, visit their website www.sancanational.info. You can also use their WhatsApp helpline: 076 535 170. 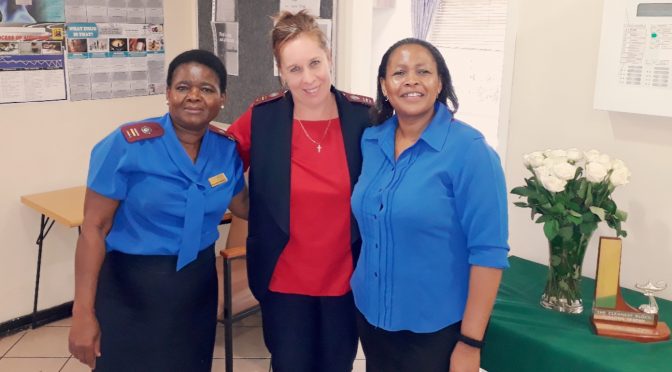 With two decades of experience in the healthcare field, Wedge Garden’s new deputy manager and professional charge nurse brings to the table a wealth of knowledge that complements the substance abuse treatment centre’s dedicated professional team.

“As part of Wedge Garden’s multi-disciplinary team, I am hoping to add the experience gained in many disciplines to Wedge Gardens and to the patients,” she says.

One of her past positions was at another Gauteng-based rehabilitation centre. “I gained lots of experience in the field of addiction and found that I have an affinity for it.”

Estelle completed her B.Cur degree in 1995 through Potchefstroom University and registered as a nursing sister (general, community, midwifery and psychiatry).

Before joining Wedge Gardens, she was unit manager medical ward: Life Dalview Hospital. Before that she was nursing service manager: Elim Clinic. Estelle has vast experience in occupational health, as a maternity and labour ward sister and as a theatre sister. She also did a stint in Saudi Arabia.

A fan of evolving with the times, Estelle has completed a number of short courses.

“Since starting at Wedge Gardens, everyone has welcomed me and made me feel as if I am an old colleague. Team members and all patients at Wedge are amazing and I am truly blessed to be working here,” she says. 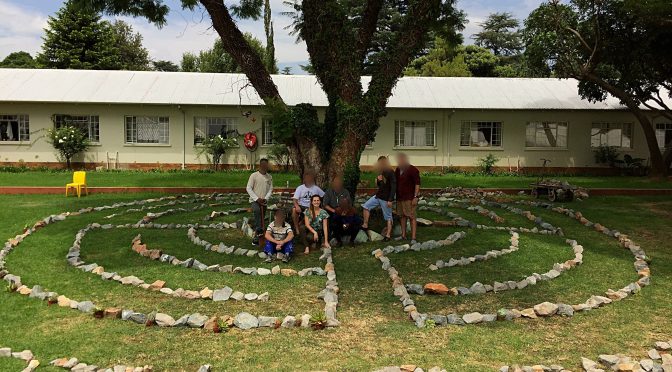 “The aim was to provide an additional space for mindfulness practices at the Wedge Gardens to fuel and support the dialectical behaviour therapy (DBT) and mindfulness-based stress-reduction programmes that the OT department run every weekday morning,” says Kendra Neethling, who heads up the department.

Mindfulness and emotion regulation, which are skills of DBT, have been recognised as key components towards any recovery process. Fuelled by the desire to motivate and engage the patients at Wedge Gardens in mindfulness, Kendra began the process of collecting donations for the rocks needed to form the borders of the walking labyrinth.

“A huge thank you to Pebbles for Africa for their help in reducing the costs of two truckloads of rocks. Gratitude is also extended to all individuals (whose names are recorded around the labyrinth) for their contribution towards raising funds for the OT project, as well as to Rand Aid for its continued support.”

Kendra says the construction of the labyrinth was a rewarding process for all involved. “The patients were taught to take initiative during the construction process and as such were encouraged to work collaboratively – utilising communication and problem-solving skills, as well as frustration tolerance, in the formation of ideas and the implementation of action.

“The pride I have in my patients is huge. Not only have they shown investment in their recovery process by actively engaging in all elements of this project, but they have created a space that can be used for years to come by future recovering addicts and alcoholics. Mindfulness is an exceptionally powerful medium in developing skills that combat anxiety, depression and rumination as well as emotion regulation, self-compassion and awareness.”

Occupational therapists work through activities to help with awareness of self, skill development and the creation of functional, meaningful and goal-directed lives. Every project initiated by the OT department at Wedge Gardens is centred around optimal patient care and treatment.

“It is a fantastic experience seeing the change that occurs in an individual when they engage in something that stimulates passion, creativity and enthusiasm – and even more so when it promotes change in behaviour.” 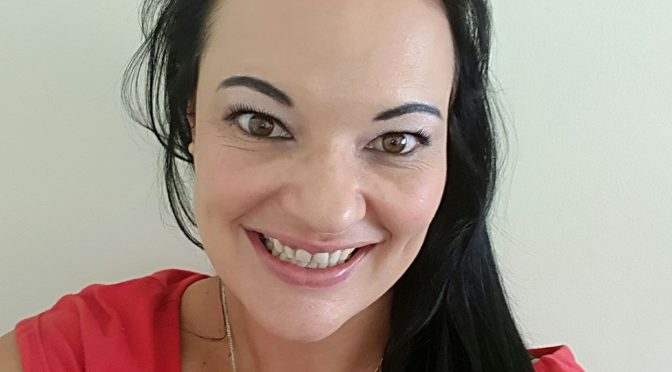 Sanca-affiliated Wedge Gardens has developed a holistic treatment programme based on multi-disciplinary interventions that focus on assessment, behaviour change, family and community integration and recovery care within the life cycle of addiction, from onset to the later years.

“People diagnosed with a mood disorder are twice as likely to abuse substances and one-third of people with depression have an alcohol problem. People who are depressed may drink or abuse drugs to lift their mood or escape from feelings of guilt or despair. But substances like alcohol, which is a depressant, can increase feelings of sadness or fatigue,” says Karen.

She explains that people can experience depression after the effects of drugs wear off or as they struggle to cope with how the addiction has impacted their life. “A drink or two or a line of cocaine might temporarily relieve some symptoms, but the backlash when the chemical leaves the body brings the depression to new lows. This withdrawal depression happens each time chemicals leave the body. This can trigger the use of more alcohol or drugs because they will help get rid of the bad feelings.”

Those who suffer from depression are combating more than just occasional sadness. Many times, the symptoms of depression manifest physically as well as mentally. Some of the symptoms include the following: aches and pains, sleeplessness, hopelessness, anxiety, weight issues, sleeping too much, no energy, crying, worthlessness, irritability, suicide and general loss of interest in life. Some roots of depression include brain functioning, environment and childhood experiences, genetics, situational factors and chemical imbalances in the brain.

“It’s not clear fact which comes first – addiction or depression. Some people develop alcoholism or drug addiction first while others develop depression first. Because drug-use symptoms can imitate the symptoms of depression, it can be difficult to diagnose depression when a person is actively using,” she says.

A person who abuses a substance may also develop depression. For instance, the person may abuse a substance, become addicted, and eventually it affects their life negatively. These effects may contribute to developing depression as it alters the levels of serotonin.

On the other hand, people who have depression may abuse a substance to self-medicate and treat the problem. Although substance abuse may be used to relieve symptoms, chemical intoxication can make depressive episodes more severe, increasing the frequency and intensity of negative thoughts and self-destructive behaviour. “Typically, this is only a temporary solution, as the substance abuse worsens the depression over time. Drug or alcohol dependency can cause a great deal of hardship across all spectrums of life and ultimately worsen the person’s depression.”

The World Health Organisation states that 350 million reported people suffer from depression, half of which won’t receive treatment.

Treatment for depression and substance abuse generally includes the use of both medications and therapy. Antidepressants may be used to stabilise mood, and various medications may be used as needed to moderate withdrawal from substances of abuse. Therapy makes up the backbone of treatment, addressing issues related to both disorders. A rehab programme that addresses both depression and addiction may help to stop the progression of both disorders and empower the individual to build a healthy, sober life.

“Someone who had depression before they began to abuse substances will most likely need treatment, including medication intervention, for a longer time than someone whose depression was caused by the cycle of addiction.

“Depression is a chronic, progressive illness that may get worse without treatment. The only way to treat this serious disorder effectively is through professional therapeutic interventions, such as behavioural modification, support groups, motivational therapy and antidepressant medications.” 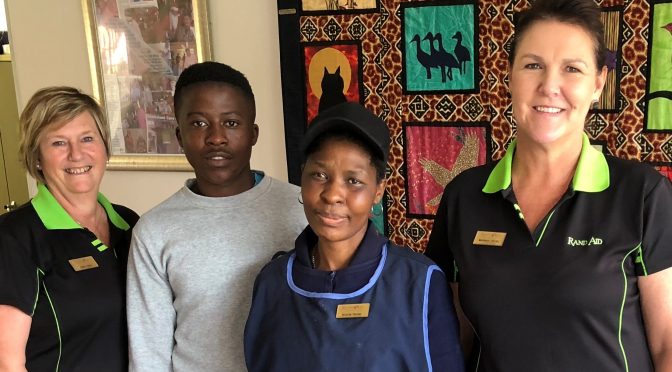